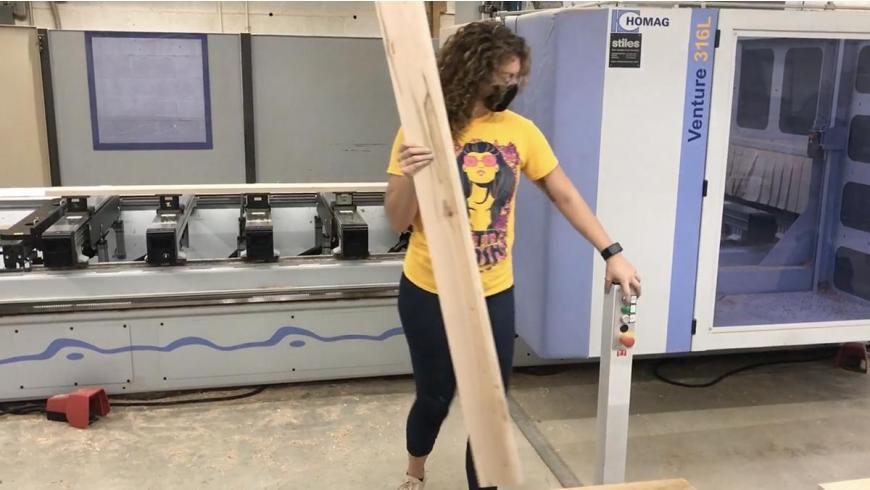 If science fiction had its way we would all be working for robots by now. That day will likely never come, but there is no doubt that automation has profoundly changed the manufacturing landscape; almost entirely for the good and without making human beings obsolete.

Here at Gat Creek, we owe a good deal of our success to our investment in four CNC (computer numerically controlled) machines.

“Automation is very important to being competitive,” Gat Caperton said. “The key is understanding what you automate and what you don’t. Where appropriate we aggressively automate. Where people do the job best, people are doing the job.”

One of the things people do much better than robots is deal with randomness. And there aren’t many things more random than a stack of hardwood timber. Selection of the boards for beauty and consistency, what to cut, what to cut out, how long to cut and so forth are tasks all handled by people.

Once the material has been converted into a consistent form, it’s automation’s turn. Robots do one thing exceptionally well — repetitive tasks on uniform shapes. As in the machining of boards that were selected and cut to size by a human.

“The CNC does all of the necessary machining,” Gat said. “It picks up the tool and moves over the board, cutting away the excess material as a hand would. Except it’s faster and it’s more precise. A third advantage of the CNC is that it can do five or six operations at the same time instead of just one.”

It’s a remarkable process to watch as articulated arms within a sealed container maneuver over and around the board, cutting away material, sawdust flying. Almost instantly a square post is transformed into a perfectly tapered table leg, a board becomes a drawer front with precise dovetails. The maker now has perfect parts with which to begin building.

“Building is for human beings,” Gat said. “We do it far, far better than a robot ever could.”

But the robot’s contribution is essential. No one would argue that point more than our furniture makers. Before the arrival of the CNC machines, our builders often had to struggle with inconsistent parts. More time and effort was required bringing the parts up to Gat Creek’s build standards, ensuring tight, strong joints, true lines and consistent surfaces.

Now, our makers work with perfect parts and can concentrate on what they do best. With robots we can build more complex furniture, more beautiful furniture, without taxing Gat Creek’s most important asset — our people.