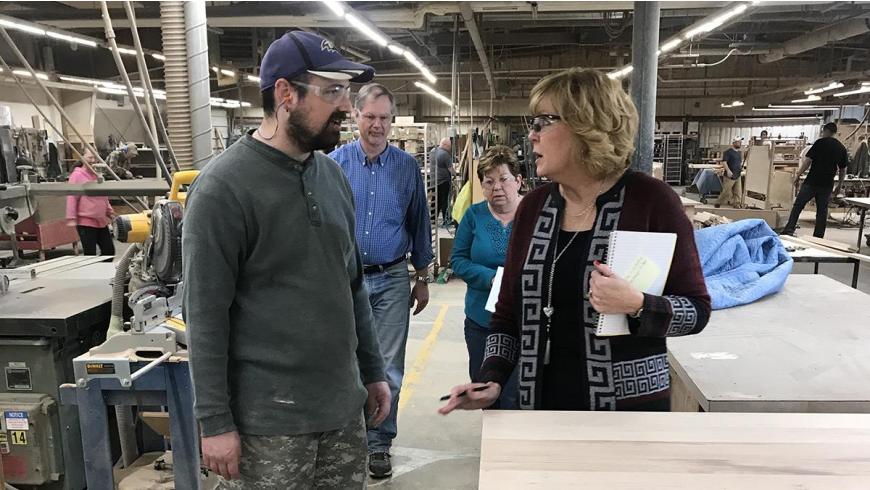 Lean Is The Muscle Behind Our Makers

The mass migration of furniture manufacturing from the U.S. to Asia was well underway when Gat Caperton bought Tom Seely’s furniture company in 1996. Some business minds might have tried to dissuade the 29-year-old Gat from entering an industry experiencing such turmoil. After all, companies much larger than the one he was buying had already folded under the pressures from cheap imports. But Gat saw opportunity.

“My business school education came at the tail end of the great Japanese manufacturing expansions,” Gat said. Toyota’s success against the titans of the American auto industry brought attention to the Lean Manufacturing practices used by the Japanese company. Suddenly it was the darling of business school curriculums. Publishers mined all aspects of the philosophy — uncovering the unnecessary, eliminating waste, defects, idle equipment, idle people — and released dozens of books on the philosophy. One in particular stood out for Gat.

“The Goal” by Eliyahu Goldratt, a novel written in 1984, focuses on the theory of constraints, bottlenecks and how to alleviate them. It has sold millions of copies and been named by Time Magazine as one of the 25 Most Influential Management Books. “I loved that book,” Gat said. “When I bought this factory I gave everyone a copy and a reading assignment.”

As it turns out, his new team was an eager audience and hungry for knowledge. The factory had previously been owned and run by a 75-year-old business man who followed traditional manufacturing methods. “What the book did was give us a language and a philosophy for improvement,” Gat said. “The workers here were more than ready to break the log jams and improve the factory. Seeing how quickly those changes had an effect became motivational.” Within six months, the new Gat Creek had trimmed lead times and inventory by 50 percent each.

While it may seem like a magic wand, Lean Manufacturing is a process that encompasses a variety of practices depending on the industry. “Our business is particularly well-suited to Lean principles,” Gat explained. “With a piece of solid lumber I can make a bed, or a table or a dresser. Unlike a car manufacturer that is dealing with thousands of parts to source and manage.” Lean works for both industries, but for Gat Creek the complexity is vastly reduced.

More than 20 years into the process the principles are so deeply ingrained throughout the organization that shifts in market demands create hardly a ripple in the Gat Creek workflow.  “Our approach to manufacturing made it very easy to transition to the market’s expectations around sustainability,” Gat said. And as other market demands presented themselves, the company has seamlessly absorbed those new realities, too. Furniture crafted to be healthier, safer for the home; furniture made to customer’s specifications for material and finish; furniture handmade in timeless designs and shipped quickly.